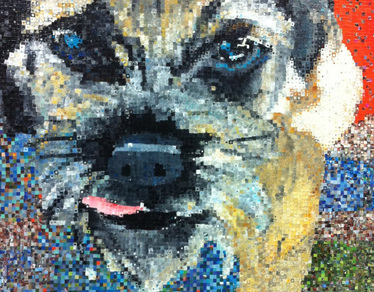 Commissioned by Barbara Elfarr, this 4'x5' pet portrait hangs in the family's playroom. The background is made of 1/2" squares cut from photographs of the Elfarr children.

From Madness to Mystery 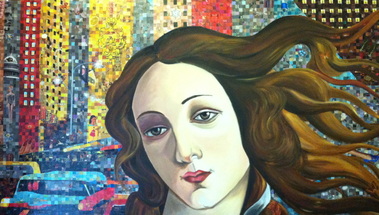 The title, “From Madness to Mystery,” presented itself to me when Melissa decided she did not want to see her painting until it was completely finished, and then she wanted to have a party to “unveil” it.  The concept intrigued me.  One view of the veil is that it is a religious item, intended to honor an object or space.  (Recognizing the sacredness of art appealed to me.)  And, of course, historically veils have also been associated with the stereotypical courtesan or harem woman, wherein the veil hints at sensuality and the unknown.  The bride’s veil, the Muslim scarf, and the nun’s headdress are other examples of veils that are used to conceal a woman’s face for various reasons.  On a spiritual level, the veil is the symbol of the pre-enlightened state, hidden knowledge, secrecy, illusion and even ignorance.  It is this movement from ignorance to enlightenment, the dropping of the veils one by one, that the title references.  As we travel this path, we attempt to proceed from the chaos of our lives, the madness, into the realm of the unknown, or mystery, with the goal of eventually reaching profound spiritual understanding.  The step from madness to mystery symbolizes the dropping away of a single veil.

When viewing the painting, you will recognize the woman in the foreground as being a direct reference to Botticelli’s “Birth of Venus.”  The face in my painting is set, however, not against a natural backdrop, but against an impressionistic cityscape, a mosaic, which is comprised of over 10,000 small tiles, or tesserae, cut from magazine pages.  The model’s coloring is more vivid and the image offers more contrast.  But like the original Venus, my depiction is intended to be read on multiple levels.  Boticelli’s Venus has been interpreted as using the beauty of the female form to draw the viewer in, employing art appreciation as a gateway into exploring more intellectual and spiritual pursuits.  My Venus is not nude and she is not rising from a seashell.  In fact, she is visible only from the neck up.  She is a modern woman and a thinker.  She is imagining her life and discovering it in a way that is artful and open.  The expression on her face indicates that she is openly searching, perhaps even filled with longing, and aware that the physical plane which surrounds her is fractured and ephemeral.  “From Madness to Mystery” is also the title of an accompanying piece of textual art.  It is in the form of an orphan leaf, a single page that has been torn from a book—in this case, from a dictionary.  Instead of being illuminated by definitions, however, the words are accompanied by fragments of poetry.